I planned to spend the last day of 2019 writing and the evening hanging out with the kids. They’re getting older, and I know that days spent celebrating New Year’s Eve with Mom are few and precious. But then I decided that I wanted to prepare a special meal for the day, which meant that instead I spent much of the afternoon in the kitchen making a cassoulet—as well as a batch of varenyky in advance for Sviat Vechir, Ukrainian Christmas Eve, next week.

So, in between chopping and sautéing, braising and boiling, I kept leaning over to jot down thoughts on the laptop positioned at the end of the counter. Once they were tucked in after midnight, I was able to finish up. Here are my stove-side thoughts for the end of a decade.

2020 is the beginning of the sixth decade I have been alive for; this is the decade when I’ll turn 50. Looking back:

So as the decade is ending, there are two things I keep thinking about:

The second thing is that it’s ok to change our minds. The only thing we can know with certainty in the present moment is how we feel right now. We may have felt differently a week ago and we may feel different in a day or a year. That’s ok, because we are all changing. To be human is to try things, to make choices, to change our minds, to try other things. Hopefully we find people to share the journey with us, so that we can learn from one another and love each other along the way.

This feels really important as I watch the kids growing up. I am aware of the pressure they feel all around them. There’s the pressure that schools put on them to figure out their futures, but there’s also the pressures of social media. In this very public reality they live in, where so much of their lives is being broadcast online in photos and in streams of words, they are expected to know and share a lot about who they are.

While this can be a beautiful way to explore identity and find community, if you’re someone who is searching or uncertain, it can feel isolating and paralyzing when everyone else seems to have figured out who they are and whom they love and what they want to do.

With these things in mind, here is my wish for my kids and for everyone as we move into the 2020s.

Don’t be afraid to finish things. Remember, when we finish one thing, we create space for something new. When you are ready, be open to the new things.

When you need help, don’t be afraid to ask. There are people who want to help. If someone asks you for help and you can help, try. This is a lesson in karma right out of the fairy and folk tales.

Try to encounter people and their beliefs with a generosity of spirit. The world is full of new ideas and experiences that will challenge us and sometimes even change us. That’s scary but also wonderful.

You don’t have to figure it all out at once. Be kind to yourself and patient with yourself. Give yourself permission to change your mind: about a major, a job, a career, a person, an idea, a place, and most of all, yourself. Being authentic means being honest about who you are and how you feel in a given moment, this includes recognizing the need to change something in your life.

I was nearly 16, the same age my oldest daughter is right now, when we moved from the 1980s to the 1990s. I can’t imagine navigating young adulthood today. Their generation is aware of the world and its global challenges in a way that we were not. They also have tools we only dreamed of.

I keep coming back to fairy tales. I’d like to think that together we can overcome the monsters… in the forests and in the closets and in the mirrors. Maybe we can see the end of some systems and patterns that have hurt people and the planet for too long. Maybe the 2020s will be the decade when we create the space for something better.

Thank you to everyone who came out to Astoria Bookshop for our New York launch and to the Book Cellar for our Chicago launch! Both bookshops were wonderful and we had a terrific turnout! I meant to write sooner, but we’ve been bouncing from one thing to the next for the last month.

We brought the kids for the NYC launch, as well as batches of Dante’s Nine Layers of Torture Bars and Pythagorean Serum cocktails to share with the audience. 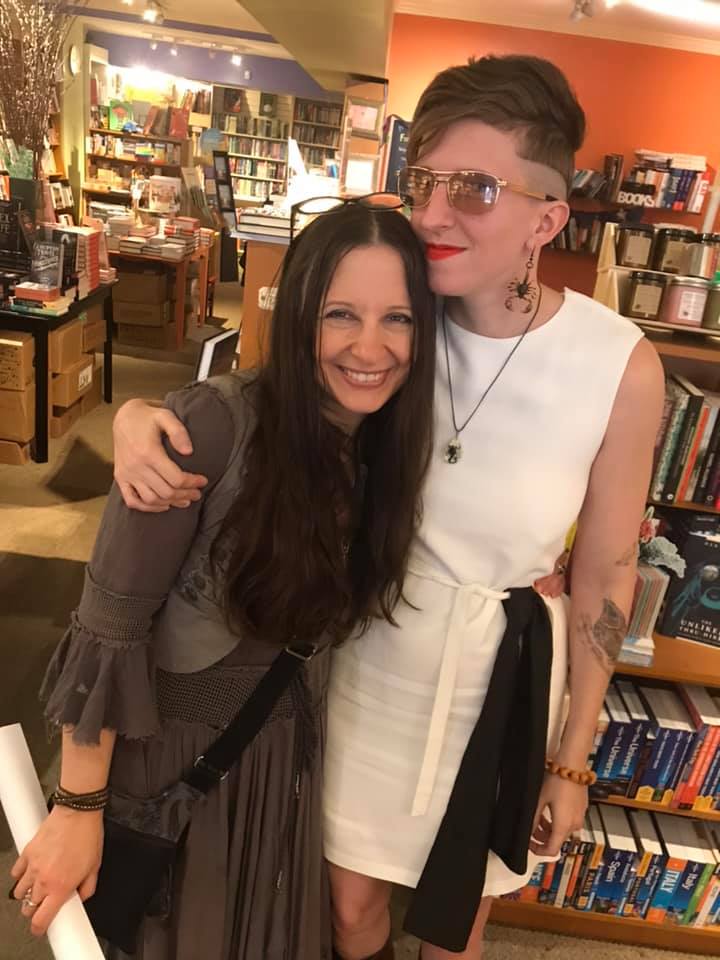 Inspired by Dingding’s costume, Stephen and I decided to dress as a gender-swapped Michael and Janet for the Chicago party…

The Book Cellar featured a special The Good Place-inspired cocktail created by Stephen that was not in the book: French Vanilla Antimatter! And we brought more Dante’s Nine Layers of Torture Bars to share with our guests.

In the last month, FORKING GOOD made it to the Semifinal Round of the 2019 Goodreads Choice Awards for “Best Food & Cookbooks!” We also had some nice press, including this featured review by Foreword:

An extended inside joke that show fans will delight in adding to their shelves, Forking Good is a comfort-food laden, lightly philosophical cookbook worth indulging in.

We were included in this feature, “Pop culture cookbooks are one thing Millennials aren’t killing,” by Danielle Zimmerman for Hypable:

We’ve exhausted so many avenues of celebrating the fandoms we love that it was only natural for us to turn to food next. After all, fandom and pop culture already nourish our souls, so why not our bodies as well?

Stephen and I also did a fun interview for i8tonight, which is their own culinary spin on the Proust Questionnaire:

Where is your favorite place to eat?

Valya: Honestly, I love to eat at home—ours and other people’s. I appreciate the intimacy and personality. Outside of home dining, we really love our neighborhood Ethiopian restaurant, Ras Dashen. Also high on our list is Band of Bohemia, such wonderful food and cocktails.

Stephen: As an East Coaster relocated to Chicago, I thank the heavens for Jimmy’s Pizza Cafe, which is the place to get real New York pizza in town.

You can read the rest here.

Meanwhile, in the kid arena, there was a lockdown at my older kids’ high school. That morning, I got a text from my son telling me that their high school was on lockdown, and it was not a drill. My son and daughter, both in the high school, proceeded to relay information to us via text about what was happening as the students shared updates with one another around the school.

As it turns out, the lockdown was prompted by two pellet guns brought in by students, and the school seems to have dealt with it safely and efficiently. Still, it was terrifying to be a parent helplessly waiting for information about your children’s safety… in school, where they should be safe. I am so grateful that all the kids are ok, and I could not help but think of the hundreds of parents across this country who have sat frozen with feelings of helplessness and fear.

We talked about it at length at dinner, and the kids were mostly calm and pragmatic, discussing places where they think security could be better, praising teachers for staying calm and helping, relaying the fears and concerns of their peers.

This is their normal. This is anything but normal.

And speaking of parenting, there was the time last week when I was tucking in my youngest, and she said something sweet about hoping to be a mom like me when she grows up. I told her thank you, but it’s also ok if she decides to be a cool aunt instead. She certainly doesn’t have to decide now.

She looked at me with that intense Lana gaze for a minute and then said, “I see what you’re doing, Mom, trying not to push me in a direction. I know how you think. I KNOW where you get your parenting from. I READ your parenting book. The whole thing.”

Then she settled into her pillow and said (very pleased with herself), “I guess I know famous people too.” And went to sleep.

Thanksgiving behind us and the winter holidays ahead, I’m looking forward to some vacation days — cozy afternoons baking with the kids, coffee dates with friends, catching up with reading beside the tree, catching up with writing under quilts, and so much cuddling on the couch.

I hope that your December is also cozy and full of things that make you feel warm and happy and loved.

Our quirky cookbook inspired by The Good Place and full of puns and philosophical meandering is out in the world today! Thank you to Quirk Books, our editor Jhanteigh Kupihea, our illustrator Dingding Hu, and the entire team at Quirk who helped to bring it into the world!

What does book release day look like for this author?

Two misplaced coffee mugs (still full) that I set down someplace until they promptly vanished (fairies, I know), dry shampoo in the eye, a quick breakfast and kid drop-off after minor sock drama, day job login and morning email, internet connectivity issues and phone camera malfunction (I know, I know, they are going to stop supporting iphone 6 soon, my son keeps reminding me) and finally a moment to post this announcement!

This book is a special blend of so many things that I love.  I’ve come to realize that writing and cooking are my creative yin and yang. One enables me to immerse myself in the blissfully solitary imaginative introvert-friendly space of creating stories; while the other allows me to prepare robust sensory meals to be shared with people I love in a setting of open-hearted conversation.

With writing, there is certainly the eventual sharing with an audience and that is a delight, but it’s delayed most of the time and generally less intimate that the sharing of a meal.

I hope that you can find something to delight you in Forking Good, whether that’s a recipe you enjoy or a provocative anecdote that sparks a conversation. I hope that it makes you laugh and think and react and respond. This book, its meals and its playful philosophical contemplation are meant to be shared and talked about, especially as we approach the end of the season and show, The Good Place.

We would love to see photos of your meals and tv-watching parties where Forking Good plays a part. Please tag them! #ForkingGood or #ForkingGoodCookbook. We’ll figure out where the best place to post some will be. Stay tuned for more on that!

You can get our Forking Good cookbook in bookstores and online, and if you have a few minutes to write a review on Amazon or Goodreads, please do! It really really helps! (Thank you to those who have already done so!)

We’ll also have our New York launch party this weekend, and Chicago the weekend after that! We would love to see you, share some food and drink, sign books, and talk about life, afterlife, cooking, philosophy, and The Good Place! (Plus if you are in New York, you can meet our amazing illustrator Dingding Hu!)

We hope you enjoy Forking Good. We are so excited to share it with you!