My head is still spinning from last weekend’s events. I loved mulling about in such diverse creative pools of people, but that’s Chicago’s literary and art scenes—such a variety of styles and voices.

Friday’s release party for Conclave: A Journal of Character was a success! An enthusiastic and attentive crowd came out to support the magazine, have wine and cheese, share cake and coffee, and listen to local writers and performers read from the latest issue. 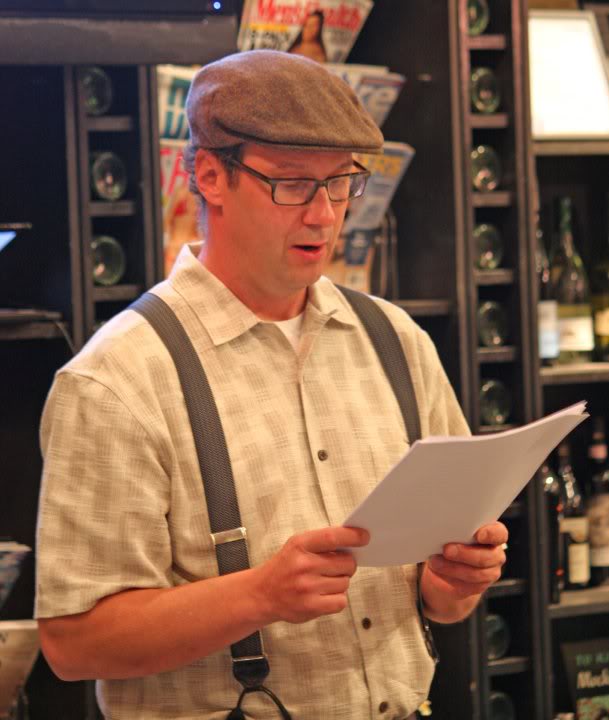 I feel protective and proud of each piece we select for publication in Conclave, so meeting their makers is always a thrill. I’m delighted when contributors travel to attend the party, and this year, Darci Schummer came in from Minneapolis to read and party with us.

It was fun meeting Darci, and I hope to see her the next time we make it up to Minneapolis.

After the last dramatic performance, sweetheart Molly Robison performed for an hour: some covers, some originals (including my favorite Patience Worth…there’s a good character!).

Perhaps the most novel aspect of this year’s release party was a last-minute decision to broadcast the readings and performances live via Ustream.

Thanks to the assistance of dizzydarkhorse , an international audience popped in to see what was happening at the Book Cellar online. I hope that we can continue to find new ways to use technology to expand our audience and promote the work in Conclave.

If Friday was about celebrating new voices and new media, Saturday was on the opposite end of the literary spectrum—honoring writers whose lifetime contributions and legacies have shaped the literary landscape of Chicago. Patrons and writers attended the benefit for the Chicago Literary Hall of Fame at the Sanfilippo Estate in Barrington Hills.

Hosted by the Chicago Writers Association, the event included a tour of the remarkable estate and a concert on the world’s largest Wurlitzer (8,000 pipes, percussions and sound effects), as well as appearances by local authors Elizabeth Berg, Joe Meno,  Sara Paretsky, Rosellen Brown, Bayo Ojikutu, Achy Obejas, Rob Duffer, and so many other great Chicago writers.

Marc Kelly Smith, founder of the poetry slam movement, emceed with colorful enthusiasm and announced the six writers to be inducted into the Chicago Literary Hall of Fame: Gwendolyn Brooks, Studs Terkel, Nelson Algren, Lorraine Hansberry, Saul Bellow and Richard Wright. Information about the Hall of Fame Induction Ceremony will be announced soon!

A second night surrounded by creative people in this one-of-a-kind location was inspiring, and I came home eager to write, to add my voice to the others who have come before and continue to write in my beloved city by the lake, our so-called third coast, this fantastic city of big shoulders.