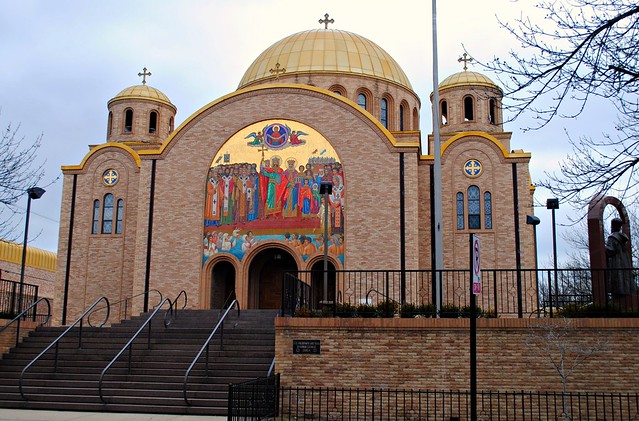 As a child, my favorite part of going to Mass at Sts. Volodymyr and Olha Ukrainian Catholic Church was the music. The walls, covered with their beautiful icons, were a feast for the eyes and my  young imagination, but it was the music that transported me into another world.

Mass was usually sung in Ukrainian and accompanied by a choir of voices in the balcony. Standing with my parents and little sister, I remember closing my eyes and feeling like I had stumbled into another world. I was absolutely certain that those voices and music got God’s attention. It was my first experience with the very real way that music could transform a space into something sacred.

The first time I remember hearing Gregorian chants, I was in high school, and it was a similar experience. I recall sitting in my religion classroom blown away by the power of those voices. Later, it made perfect sense to me that ethereal bands like Enigma or Dead Can Dance would incorporate the chanting into their music. There was power there.

As I got older, I became interested in comparative religions and learned that the ancient Greeks were among the first to document the ways that music shifted the collective consciousness of a group of people. I became especially interested in shamanic music and the ways that indigenous holy men and women used drumming and their voices to heal, to protect, and to communicate.

My first drumming circle, hearing the heartbeat of those many drums working together, was another of those pivotal moments that touched something deep inside of me. Although maybe not as elegant, drumming was raw, honest, and primal. The drum beat is so much like the first sound we all hear–the heartbeat of our mother in the womb. It is the sound of our own heart as we learn to sit quietly and meditate. It is a sound that stretches across time and space.

After following more breadcrumbs of myth and music, I encountered ritual theatre. Theatre emerged from ritual and mythology as a way to recreate sacred stories and repeat certain actions for a desired end. From the ancient Greeks to contemporary Balinese, ritual drama engages the community and allows participants to surrender themselves to the ritual process.

Last weekend, Mark and I had the pleasure of watching my favorite ritual theatre ensemble, Terra Mysterium, perform the Snow Queen version of Betwixt & Between, A Journey into Faery for their Winter Gala.

Held at the Chicago College of Healing Arts on Devon, the performers masterfully wove the web of their story about the Snow Queen, two human children, and the Fae.

All the members are talented, and I’ve had the pleasure of seeing them perform in several other venues. Each performance has been wonderful and wonder-filled, but this time I was struck by how polished they have become, how cohesive as a group.

When Terra Mysterium sang their beautiful songs, I recalled those days in church as a child, when all the world faded away and I felt a part of this magnificent music that filled the space. Their music was magic. Terra Mysterium took my breath away, transported me to another world, and inspired my imagination.

Plato believed that music was a form of medicine that brought order to our souls. In this day and age, when there is so much disorder and dissonance, we could all use a little more music in our lives.

So I leave you with two songs from Terra Mysterium:

Walk To My River (music and text by Shannah Lessa Wojtyska; arranged by Matthew Ellenwood)