I began this entry a week ago and am only now finishing it. This Autumn has been like that, full of bumps and detours.

A few weeks ago, Mark was in NY for business, and I met him in Manhattan so that we could have a belated tenth anniversary getaway that coincided (not coincidentally) with Cynthia von Buhler‘s Speakeasy Dollhouse performance.

The luxury of 48-hours together was wonderful, and Mark and I had a lovely dinner at a local bistro and then walked around Times Square. The next day we had the luxury of a lazy morning, followed by lunch at the historic Coffee House Club. Now that I’m a member of the Cliff Dwellers (as Artist-in-Residence), I have privileges at reciprocal clubs all over the country (and a few overseas). Each club has its own unique history and character.

Inspired by other Arts-related clubs founded around that time (like The Cliff Dwellers) in cities across America, a group of friends who called themselves The Foes of Finance Dinner Club held their first meeting in the old Brevoort House on February 5, 1914. After a few more members and a few different locations later, the Coffee House was born and resided in the Hotel Seymour for the next sixty-seven years.  In 1982, the hotel was demolished and the Club moved  a few doors to the west at No. 70 and then again to its current location in the 2000s.

The club has rules, but one of the rules is that there are no rules: 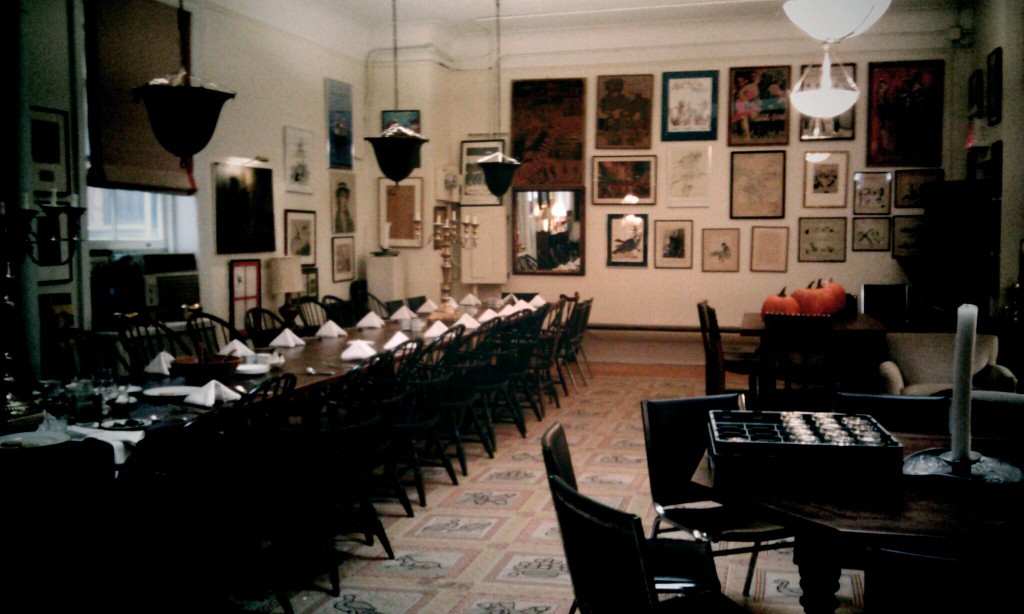 Upon quietly slipping into the club, we were welcomed by one of the members and invited to sit at the round table in the parlor. We were served drinks from the bar and waited to dine together at the one large table in the dining hall. Over drinks, we chatted with two members about the history and membership of the club. We then joined the other eight people who were seated around the communal table. Our orders were taken, and we enjoyed a delicious, hearty lunch care of chef Irene. The conversation was lively and varied, and only after he left did I find out that Mark had been sitting beside E.B. White’s stepson, writer and New Yorker editor Roger Angell!

I don’t know the names of other members who were seated at our table that day. Formal introductions are not allowed at the table. You sit down at the next available seats and like the lottery, it’s a matter of chance to whom who you end up talking to over your meal. On any given day, you can show up for lunch and meet artists and writers who have helped to shape the creative history of our times: New Yorker editors, artists, journalists who reported on the latter half of the last century.

The sad reality is that many of these social clubs are not drawing new, young members. With so much networking happening online, the Arts clubs of the past are being replaced by the online clubs of the present. While this may allow for a greater breadth and diversity of membership, I can’t help but ponder what is being lost in the process.

Later that evening, Mark and I dressed in out 1920s finery and stopped by Spano’s Bakery for “cannoli” (the codeword that allowed us to enter the speakeasy) where we were joined by the stylish Madeline C. Matz and her friend Annalisa from Connecticut. Together we slipped into 1920s New York City, and it was such fun!

The immersive theater experience was set in a beautiful former speakeasy. The setting was lush, and the actors were convincing and playful as they interacted with the audience. Artist Cynthia von Buhler created a vivid world and a provocative piece of theater in response to the unsolved mystery of her grandfather’s murder. You can read about her process here. The evening was also recorded by director Susan Marks  (of  the documentary “Of Dolls and Murder“) who is creating a sequel documentary on the Speakeasy Dollhouse.

While attending a theatrical performance (much like when I read), I easily and eagerly suspend disbelief. I love Art that engulfs me in an alternative world. Sitting on a velvet couch sipping a cocktail from a coffee cup while intrigue unfolded around me, I was delighted.  Cynthia and her actors swept us up in their mystery, and I was happy to be a part of it.

Then, just like that, it was over. The next morning, we returned to Chicago, to the kids, and the everyday. 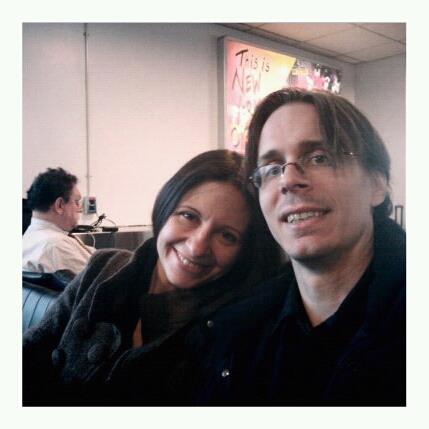