I spend a lot time thinking about how to reconcile being a mother and being a writer (and not just because I have a new book, Geek Parenting, coming out next month.) I’ve been reflecting upon what it means to be a parent today, compared with the way I was raised.

I grew up with a mother who was wholly devoted to her family. Both she and my father are the children of Ukrainian immigrants who worked grueling day and night shifts in factories and cleaning office buildings. My parents made the conscious choice to always have a parent present for their daughters in a way they never had. My mom was kind and generous to the point of self-sacrifice, preparing homemade meals and cheerfully chauffeuring us from school to Ukrainian dancing, while my dad picked up odd jobs to make up the difference.

It was a life that revolved around family and community, where the needs of the group were more important than the needs of any individual. Family would be there to help in a heartbeat, and when a call went out from the Ukrainian American community, everyone rallied. Again and again, the message was that you should apply your gifts and talents for the greater good. (It’s not really the kind of environment that nurtures writers and artists and independent thinkers, unless your art is tied into a community ethos.)

After toying with the idea of law school, I ultimately decided to pursue my childhood dream to be a writer. Soonafter, I chose to become a writer who would also be a mother.

I didn’t think that those two things were in any way irreconcilable, yet I had no real-life examples of how to create a life that would allow for both. As I tend to do with many things, I dove in and assumed I’d figure it out as I went along.

We moved overseas to live in Frankfurt, Germany, and I gave birth to a daughter, two years later a son; and two years after that the youngest of “the Wolflings” was born. I love them, I love their precious, passionate, and wonder-filled experience of the world that enriches my life so completely. We had some grand adventures together with their father exploring ancient sites and museums, tasting new foods and meeting interesting people.

However, I also lost myself for nearly a decade.

People talk about the movies and television shows, books and internet memes of the early 2000s, as I shake my head blankly, making a joke about those “lost” years.

In trying to be a mom to three young children, I threw my perfectionist personality into giving them my everything for those first few years. I reveled in their joy, and in return, they taught me so many important lessons about being a kind, patient, compassionate human being.

But if I am completely honest, I lost touch with a large part of my authentic self in the process. Some of it was compounded by living overseas during much of that time, but not wholly. Much of it was about prioritization and juggling all the parts of a life. I didn’t talk with many friends and family for years, and I stopped writing.

I didn’t know how to carve out time for me and for my marriage while trying to be a “good mother.” I didn’t know where to look for examples and models. My parents were not a model that worked for me.  So many of my creative friends chose not to have kids, and many of those with kids had different challenges. Even as I loved being a mother, I felt like an important part of me was disappearing.

Those of you who know me, know I have a love-hate relationship with technology. But the truth is, the internet saved my creative spirit.

Living in Frankfurt, I got wind of Amazon.com’s new idea to have a “breakthrough novel award” and I pulled out my manuscript for The Silence of Trees that had been sitting on the shelf since my agent and I parted ways a year prior. I made the choice to start writing again. I found online communities of writers.

In 2009, just as I was preparing to move back to the States, I found twitter, and in so many ways that was the most important creative touchstone for me over the next year. Nowhere else could I throw a rock into the waters and know that there was usually someone there to see it and sometimes respond. I met writers and artists who were also up in the wee hours of the morning working: @neilhimself, @NancyHightower, @CynthVonBuhler, @SaraJBenincasa, @Evitchka, @ayeletw, @amandapalmer, and so many others. A few were even parents and talking with them was the greatest of gifts. They became dear friends, many of whom I still see today. I started to feel less alone and more like myself than I had in a decade.

That was when I made a choice to stop seeing myself as a mother of three young kids who would sometimes write whenever I had a moment; and I became a writer, one who is committed to doing the work, who is also a mother. In many ways, it’s a matter of semantics, a small but shuttle shift in perception, but it’s an important change in the way I see myself and approach my work.

Seven years later, and I’m only now starting to truly feel like myself again.

It’s taken a lot of trial and error: a novel published, a literary journal started and then sold, countless routines started and stopped, more manuscripts written, organizations joined, prose and poetry published, more than a few loved ones lost and buried, readings performed and book clubs visited, a marriage that ended but thankfully evolved into friendship, new networks of friends formed and old ones strengthened, and the impending publication of a new book with a kind and supportive co-author. 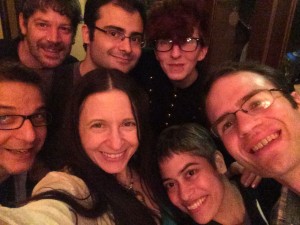 Over the last seven years, I’ve read a lot of books by other artist parents, and I’ve talked to many working parents to try and figure out just how we can give our children what they need without losing ourselves in the process.

No one has the answer. We all just do the best we can.

I recently read a post by Amanda Palmer that accompanies her new song, Machete. Ever since she became pregnant in 2015, Amanda has been publicly blogging about her decision to have a child with her husband, Neil Gaiman. She grappled candidly with her fears in her blog (read here) and on twitter.

After their son Ash was born, Amanda retreated into that private sanctuary of motherhood that involves sleep-deprivation, doting on the baby and all his needs, and adjusting to all the changes–she was understandably quiet for a while.

Now that Ash is a few months older, Amanda has begun working and writing with greater regularity. This week she released a new song, Machete, dedicated to the memory of her beloved friend and mentor, Anthony, who died a few months before the baby was born and for whom the baby is named.  She also released this beautiful image (photograph by Allan Amato):

Amanda writes on Patreon about her process of creating the song, “Machete.”

“it was at this point that i gave myself what i’d call an enforced crossroads. a fictional ultimatum.

“once i did that to myself, it was curtains. i stayed up and i wrote the song, just to prove to my terrified parent-self that i could. i left the baby in the suitcase, and when he croaked and cried and complained too much, i snuggled him into a wrap against my chest and kept writing. sometimes i had to stop and feed him. i stopped and fed him. then i kept writing. by four in the morning, i had a song.” (Amanda Palmer. “Machette.” Web blog post. 9 Mar. 2016.)

(Note: I feel that it’s important to mention that being a parent is not inherently boring, and for many people that is the most beautiful and fulfilling of choices. I’m quite certain that’s not what Amanda meant either. The point is that we all have things that engage our hearts and souls and imagination, and when we ignore those things, so much of the rest of life turns into sad, dull shades of grey.)

I think about those crossroads ALL THE TIME.

There are plenty of mundane things that have to get done: laundry, cooking, cleaning, bills, shopping, driving kids from place to place, papers graded, etc. I’m happiest when I’m filling the rest of the time with things I love to do, whether that’s dancing in the kitchen with the kids, spending time with loved ones, reading or watching something beautiful or provocative, listening to music…and writing. 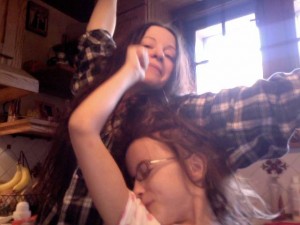 When I face a decision, I think about whether or not it is aligned with the kind of life I wish to be living. That’s why I now rarely choose to watch television, pick my excursions carefully, and try to pull back on my time on social media–because at this moment, with all the things that require attention, there is just…so little time. I want to make it count, and I don’t want a life always fast and frantic and filled with things to do. Sometimes it means not doing the housecleaning or laundry. Sometimes it means daydreaming on a park swing or taking long walks or playing Clue with the kids. But each one is a choice.

Soon to be 9, 11, and 13, the Wolflings are approaching ages of increasing independence, and I treasure my own independence enough to not seek to deny them theirs. Because as much as I hold dear the memories of their sweet, all-encompassing childhood love, I cannot wait to meet the passionate, creative, compassionate and interesting young people I hope they will grow in to.

I truly believe that one of the best way we can teach our kids is by being their example. It’s something Stephen H. Segal and I wrote about in Geek Parenting, in the context of the show The Legend of Korra: “Be an avatar of the principles you want your child to learn.”

Whether or not we are parents, we all go through our days making choices, some big, most small. Those choices affect other people–they may perpetuate systems or challenge the status quo, they may start revolutions or comfort the quietly dying.  Who we love, what we do, how we live–every choice may not rock the world, but it does have ripples.  Sometimes we stay up all night and write a story or song, sometimes we hold the hand of a sick friend or comfort a child who had a nightmare.

Each one of us matters. 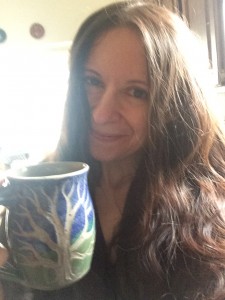