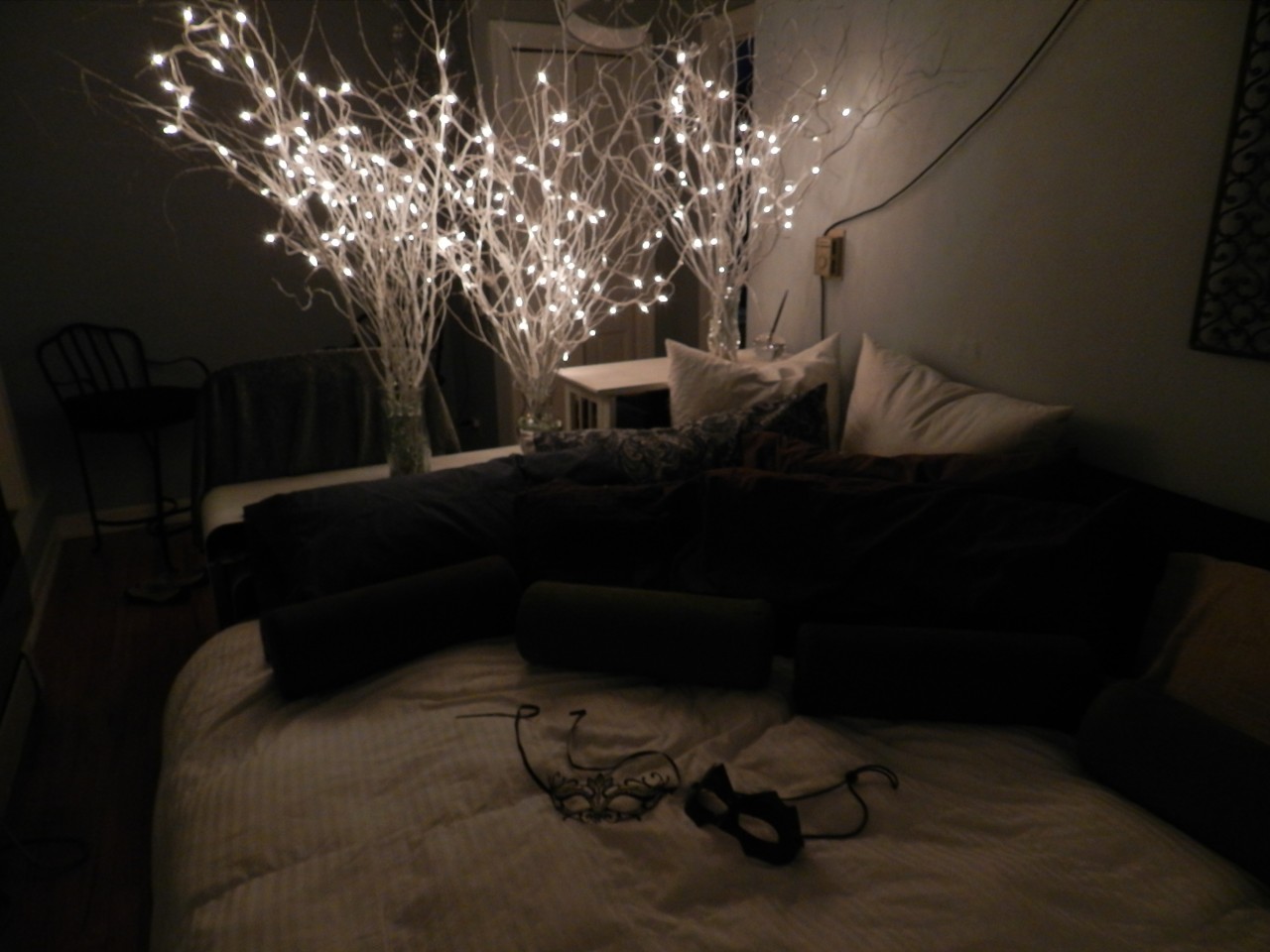 “We write to taste life twice, in the moment and in retrospect.” ― Anaïs Nin 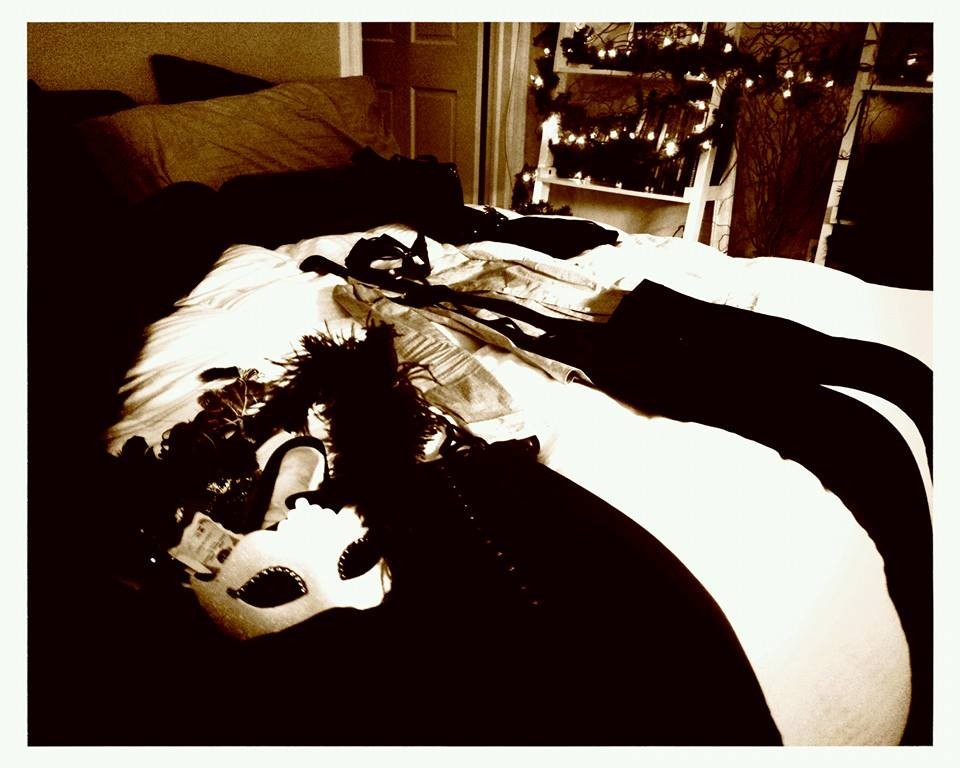 Many of the things I write in this journal, I write to remember. Not just as a place to preserve moments and photographs for the future (although there is that), but the very act of writing it down is a way to relive the experience, transferring it onto the page.

Earlier this month I went to New York to visit my friend, Nancy Hightower. Part of that visit was a party we had been planning together over the last few months: A 12th Night Midwinter Masque at the fabulous East Village townhome she rents from fellow writer, David Edison.

On our invitation, here’s how we described the evening:

At All Hallow’s Eve, the doorway in between the worlds is opened, beginning a season of magic, of faerie revelry, of dreams and inspiration. With the winter solstice and the lengthening of days, that season of liminal spaces begins to close, marked by Twelfth Night, an end to the holiday season and a final faerie celebration. We invite you to dress in your favorite holiday finery, don a mask (or you can choose one at the door), and enter the liminal space for one final magical celebration.

An air of anticipation swept across the facebook pages of friends. As the date approached, people posted photos of their masks–some elaborate, some whimsical. In the dark, gray space after the holidays, people seemed to be looking for a little magic. I was.

An article by eco-journalist Russel McLendon circulated earlier this winter introduced many Americans to the Danish tradition of “hygge“:

Denmark endures dreary winters with the help of an arcane cultural concept known as “hygge.” It’s not an easy word for outsiders to pronounce — it sounds sort of like HYU-gah — and it’s even harder to translate. Hygge apparently has no direct analogue in English, and related words like “coziness,” “togetherness” and “well-being” only cover a fraction of its nebulous definition.

I love this concept. I love the opportunity to create an inviting space where people can celebrate togetherness and coziness. I like to think that our Masque was a hygge, something many of us need in the cold of winter. Nancy and I had frequent online chats to discuss decorations, ways to transform the apartment into a winter fairyland.

Friends made plans to come in from out of town: Philadelphia, Boston, Washington D.C., Dallas. David Edison decided to attend at the last minute, flying in from San Francisco. Everything was coming together.

Then snowstorms and freezing temperatures hit the Midwest and East Coast.

After a few hours of delay, I thankfully managed to fly out of O’Hare before the storm hit NYC. That night Nancy and I stayed up until the wee hours hanging snowflakes and stringing white lights, creativity punctuated with much needed laughter (and delirium).

Other friends had to adjust their travel plans because of the weather, but everyone made it! Theodora Goss came in from Boston and Brooke Bolander made it from Texas.

The four us put the final touches on the party: preparing food, setting out drinks, lighting candles.

A few more friends arrived early to lend a hand, and the magic took over.

With the snow and the cold, we weren’t sure just how many people would venture out, let alone dress up and wear masks. We hoped that they would all find places to sit and gather, taking advantage of all three floors.

Trudging through the snow, on buses and trains, our guests arrived.

Nearly all were bemasked. Many arrived already in costume, while others came bundled up with clothes to change into.

The doorbell kept ringing and groups kept appeared at the door. Like the TARDIS, David’s apartment seemed to swell inside to accommodate everyone. 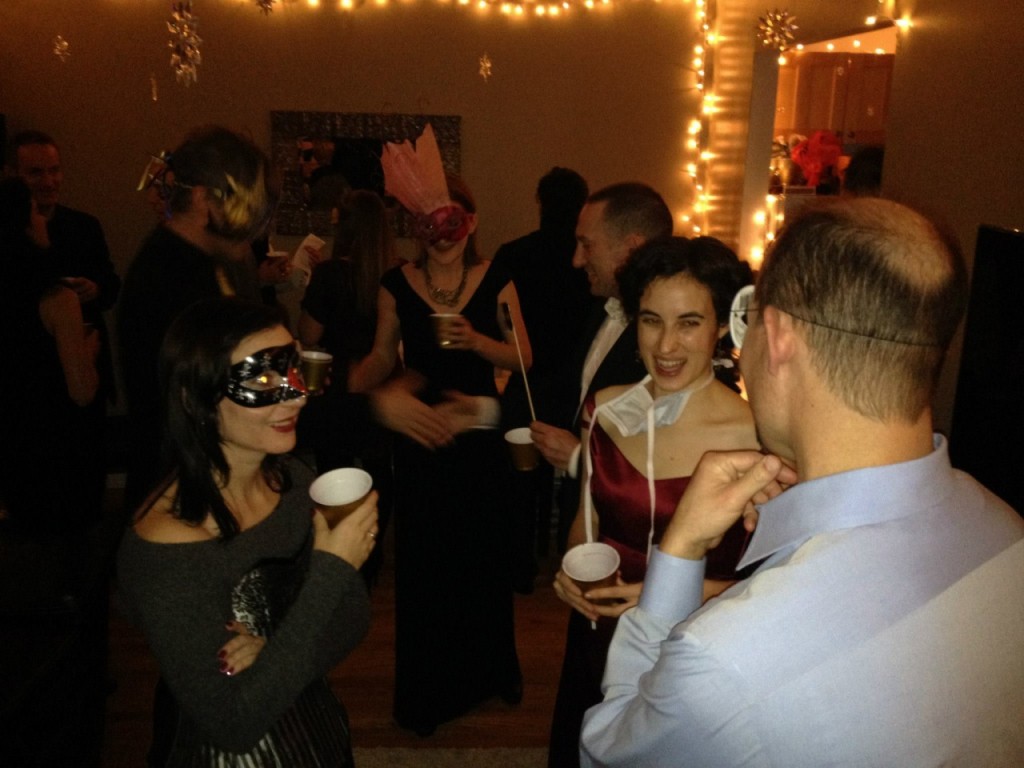 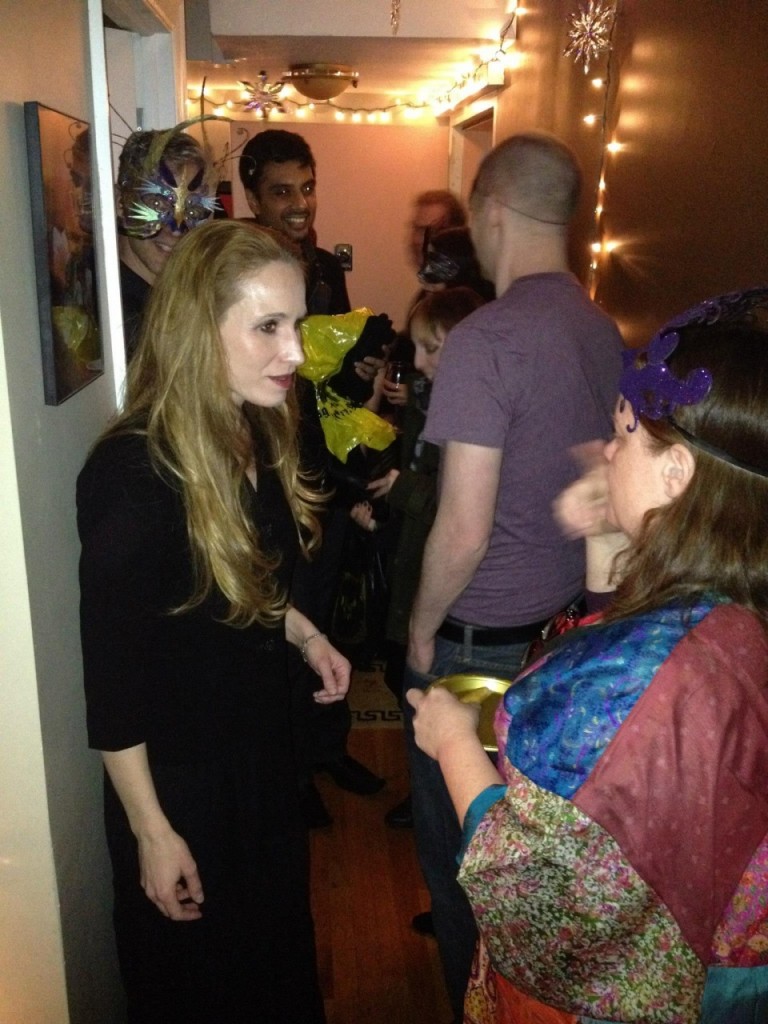 After most people arrived and settled in, Nancy and I could finally relax and enjoy the company assembled, and what a fabulous, motley group it was!

Hours flew by in a glittery haze of masks and laughter, eating and drinking, talking and sparkling. 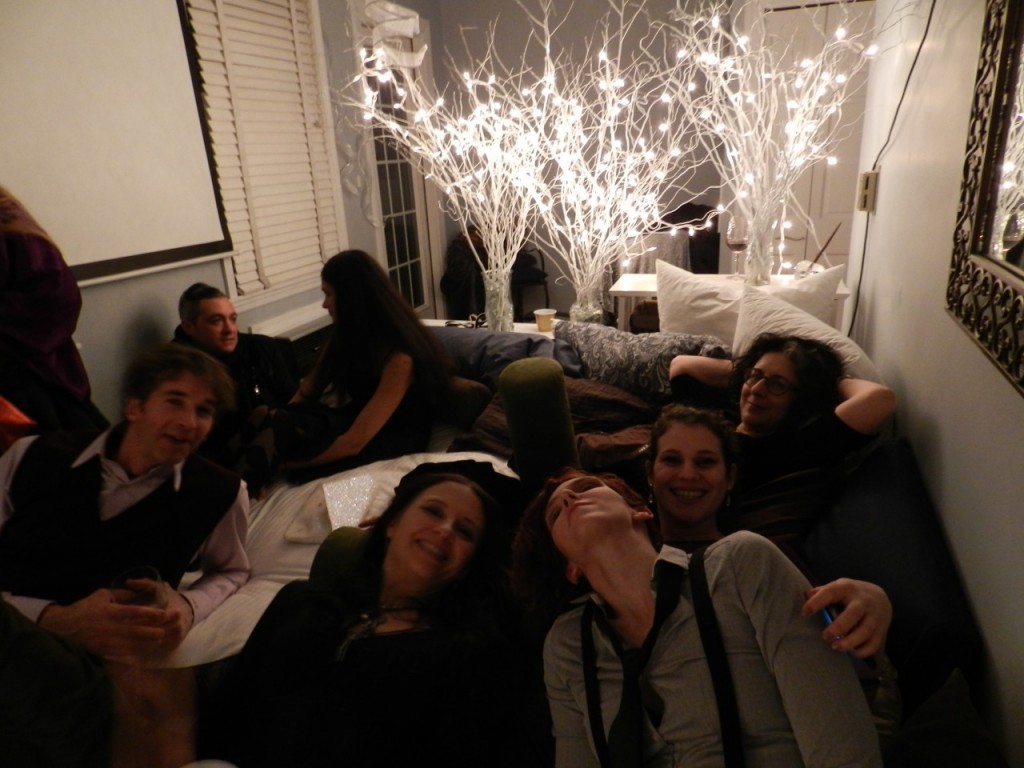 As our guests left, we invited them to take a key and write upon the attached wooden tag what they would like to unlock in 2014–a small way of bringing home a little of the magic of the Masque, a talisman for the year ahead.

Then, in the early hours of the morning, those who remained sat on the softest of rugs and finished off muskat and marshmallows, chocolates and vodka. 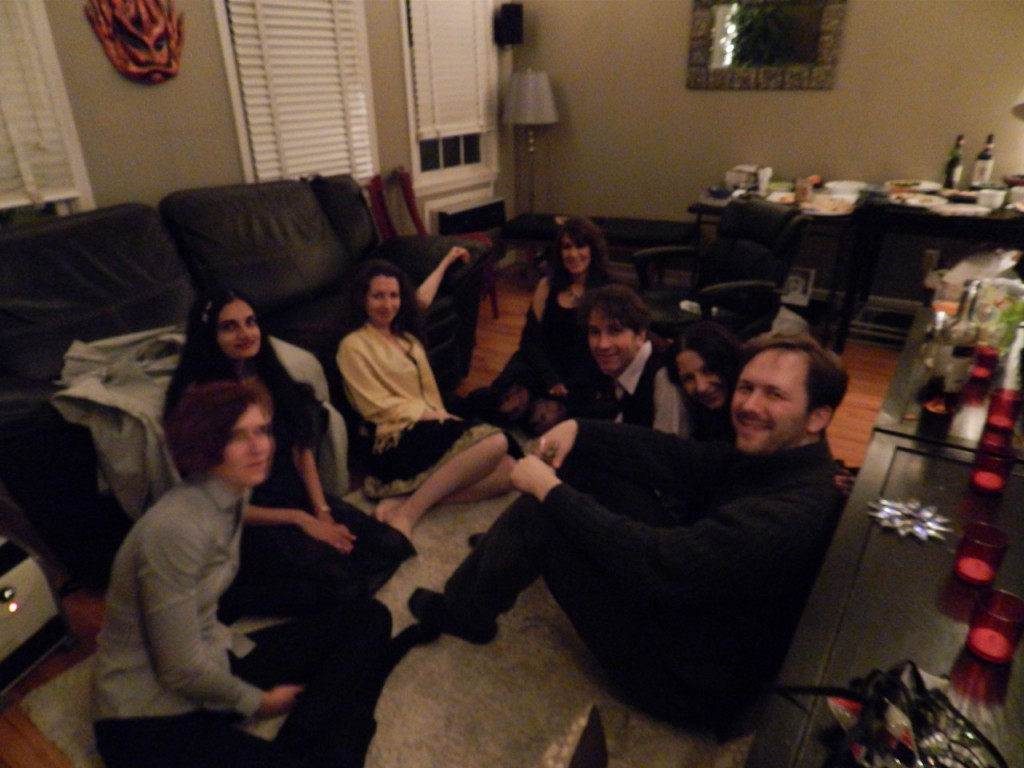 The Masque was a wonderful gathering of writers, editors, artists, musicians, witches, and wanderers; and together I think we succeeded in transforming the apartment into an otherworldly realm.

For those of us who so often dwell in the fantastic landscapes of our own imaginations, it was nice to have a cozy space where we could gather together with our creative tribe to escape the winter.

In Charlotte’s Web, E.B. White writes, “It is not often that someone comes along who is a true friend and a good writer.” Such true words in that children’s book. At the Masque, I had the good fortune of being in the company of several people who are both of those things. For that I am so grateful, and I look forward to the next time we are together. 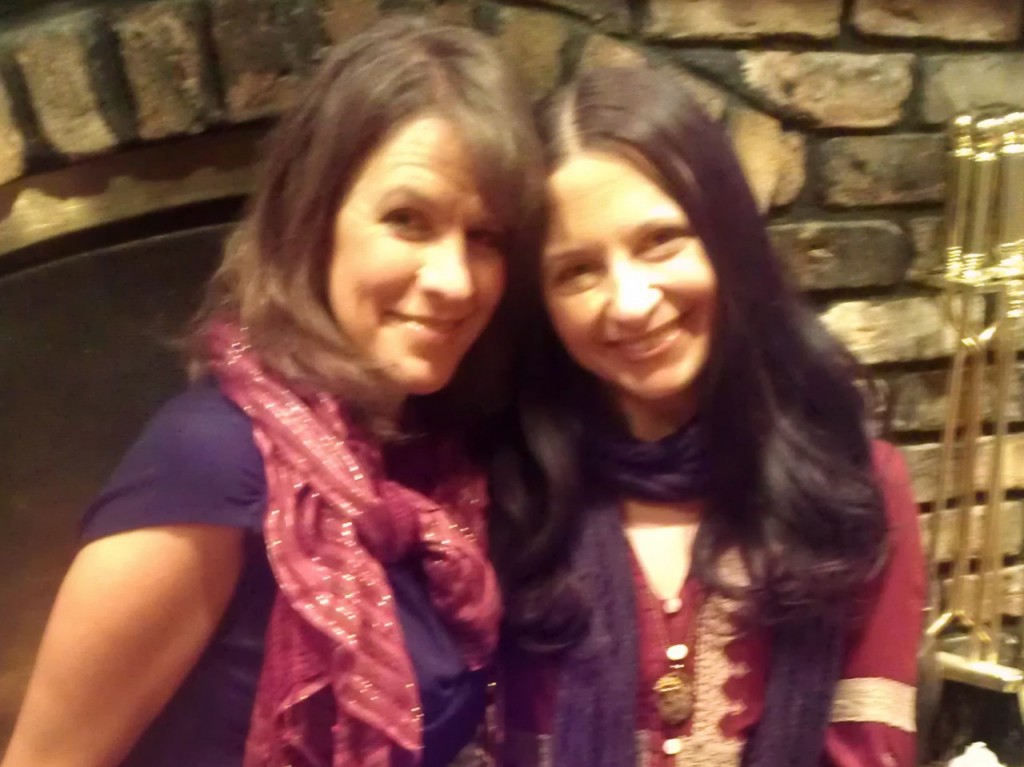