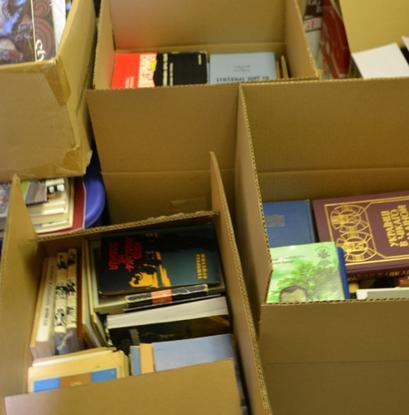 “But you can’t make people listen. They have to come round in their own time, wondering what happened and why the world blew up around them. It can’t last.” ― Ray Bradbury, Fahrenheit 451

Burning books–it’s a powerful metaphor for tyranny, censorship, and ignorance. From the burning of “heretical” books during the Spanish Inquisition to the burning of rare Sub-Saharan African medieval documents by Islamist insurgents in Mali last year, our history is full of examples of libraries and precious volumes being destroyed as one group conquers another or seeks to control the ideas and culture of a people.

In March of this year, Pro-Russian activists forced their way into public buildings in Kharkiv and Donetsk, Ukraine, and destroyed volumes of Ukrainian history, literature, and archival books, including some devoted to the Holodomor (the man-made famine imposed by Stalin’s regime in 1932-1933 that killed 7-10 million people).

Why burn them? Destroying books is an attempt to silence people and erase their past and their influence. Books hold stories and histories; they preserve language and traditions; they document people and places; and some of them are archival treasures. It hurts my heart to think of all that’s been lost in the destruction of libraries and archives around the world over time.

Referencing the destruction during WWII, in his  ‘Message to the Booksellers of America,” President Franklin D. Roosevelt wrote:

“Books can not be killed by fire. People die, but books never die. No man and no force can abolish memory … In this war, we know, books are weapons. And it is a part of your dedication always to make them weapons for man’s freedom.”

Books can touch people’s hearts, challenge their assumptions, sometimes change their lives. For me, the incredible potential of words is one of the main reasons I became a writer. Books are powerful. The right books can make ripples that change the world.

When I was growing up, like many Ukrainian American children of first and second generation immigrants, I was taught that it was my responsibility to learn the language and history of Ukraine, to do my part in the preservation of Ukrainian culture and traditions.

Most of us growing up in the Ukrainian Diaspora knew that so much was suppressed and destroyed in Soviet Ukraine, and we watched the efforts of our elders to safeguard all they could of Ukraine’s history and culture. This is why the Ukrainian National Museum (UNM) was created back in 1952 in Chicago.

The Ukrainian Diaspora has been closely watching events unfolding in Ukraine. As soon as word spread about the books being burned in Kharkiv and Donetsk, the UNM began to immediately collect Ukrainian language books to replace all that was lost.

“People have been very generous and donated family collections of books. We have 50 filled boxes,” explains Anna Chychula, UNM Administrator. “Now we need help to fund the cost of shipping.”

The UNM  has launched a crowd-funding project to cover the cost of sending the books to Ukraine and hopes to raise $5000. They’ve chosen Razoo.com, a fundraising platform for registered nonprofits. The beauty of crowd-funding is that every contribution helps. For those interested in participating, the campaign is explained on their Razoo site: http://www.razoo.com/story/Books-Matter-Replace-The-Burned-Books-In-The-Kharkiv-Library (or click on the widget below):