Sometime last month, as the weather started warming up and the days began to get longer, I realized that I was breathing deeper, feeling hopeful, and closer to “normal” than I had in a long while. It made me aware of just how tense I had been this past year: shoulders tight, jaw tight, brow furrowed. All the time.

Like many of you, I have spent much of the last year tight with fear and anxiety, worrying about how to keep my loved ones safe, how to help the kids get through this, how to create positive memories in the midst of it all, how to practice gratitude, how to try and support those who need help and those who are working to make things better, how to be a friend without the luxury of shared time and space, how to prioritize, self-care, and keep connections.

My friend Nancy Hightower is a college professor and writer living in New York City. She spent much of the last year of quarantine alone in a city that is well-known for bringing people together.

Nancy, like many people, moved to NYC to be with people. What happens when all those New Yorkers, who usually breathe life into the public spaces that are the nervous systems of that vibrant city, are forced to disengage and isolate themselves?

Nancy would mask up and go on walks every day in her neighborhood, and she started taking photographs of what she encountered.

What Nancy photographed over the last year is the subject of her Patreon (and for those who don’t know what that is, Patreon is a crowdfunding platform that enables supporters/patrons to pay and support artists for their work). She shared a lot of her photos with me over the changing seasons, and they were rich food for my imagination. I think it’s a similar reason that so many people took refuge in Animal Crossing, Instagram, and TikTok. We needed windows into worlds outside our own.

Nancy’s photos capture relics of this moment; they are tiny portals into people’s lives left on doorsteps and balanced on mailboxes, draped over fences and hung from lamp posts. It was as if New Yorkers, forced into their apartments and unable to inhabit their museums, cafes, restaurants, galleries, bars, and parks, started leaking bits of their lives and themselves onto the streets. Here was a cookie jar beside a pair of vintage cowboy boots filled with plastic flowers, there was a lamp and a typewriter and a bag of rice. Sometimes it felt like poetry, other times like an art installation, or a Rorschach test for the state of mind of a city mourning and struggling.

Nancy has started sharing those photos with accompanying essays on her Patreon. The most recent one about how we have been changed by the pandemic struck a chord with me, and I wanted to share it. She’s made it public, so you can follow the link to see all the photos. You can join her Patreon if you’d like to read/see more.

Nancy writes: “This Spring you might find yourself being simultaneously hopeful and exhausted. You might not know who you are anymore–alone, or with other people. I’ve had sporadic dinners with pod friends over the past year, but nothing close to real, sustainable community, no touch longer than quick hug. I wonder what I’ll look like by the time I can be in a group, maskless and yet changed, a time traveler finally trapped by time.”

We have all been changed by the events of the past year, for better and for worse—as a nation, as cities, as neighborhoods, families, and individuals. We won’t be able to see just how far those changes go for a a while, but I think they will go deep.

We are still in a pandemic. The numbers are rising even as more people are getting vaccinated. There is hope, but there is also a need to remain disciplined. I feel like when I look into the mirror, I’m more than a year older. I think about my grandparents and their parents before them, who lived through war and famine and so much death and sacrifice. They were changed by those events too. Some of them shared their stories, and I am grateful.

It’s going to be important to remember, to document this time, to share our stories, to listen to one another when we finally come together, to really see ourselves and our neighbors  as we emerge from this—inevitably changed.

Last week, I heard about the blackout in New York City, 42 years after the Blackout of 1977, which lasted 36 hours. I noted that it was interesting, and went back to typical weekend preparation for the week to come.

The next day, over lunch, I was catching up with social media, and I read about a challenge issued by singer Amanda Palmer to write a song inspired by the blackout… due in a week. (That’s tonight, Sunday, July 21, 2019.) I thought, “It might be fun to collaborate with Liam on that.” Liam, my son, is 14 and has been composing on piano and GarageBand for the past few years, and taking classes with the incredible folks at Access Contemporary Music in Chicago.

But there was the day job to focus on, and life and writing and summertime kid-shlepping, so I tried it put it out of my head again.

Except I couldn’t. The song kept writing itself in my brain, much like poems and stories do. The more I try to not write them, the louder they respond in my head. So… I opened a window and kept jotting down notes.

That night, after putting the kids to bed, I turned sheepishly to Stephen and told him I had written a song, except it had to be under 5 minutes, and it was 10 minutes long (and I had already cut 1/3 of it.) 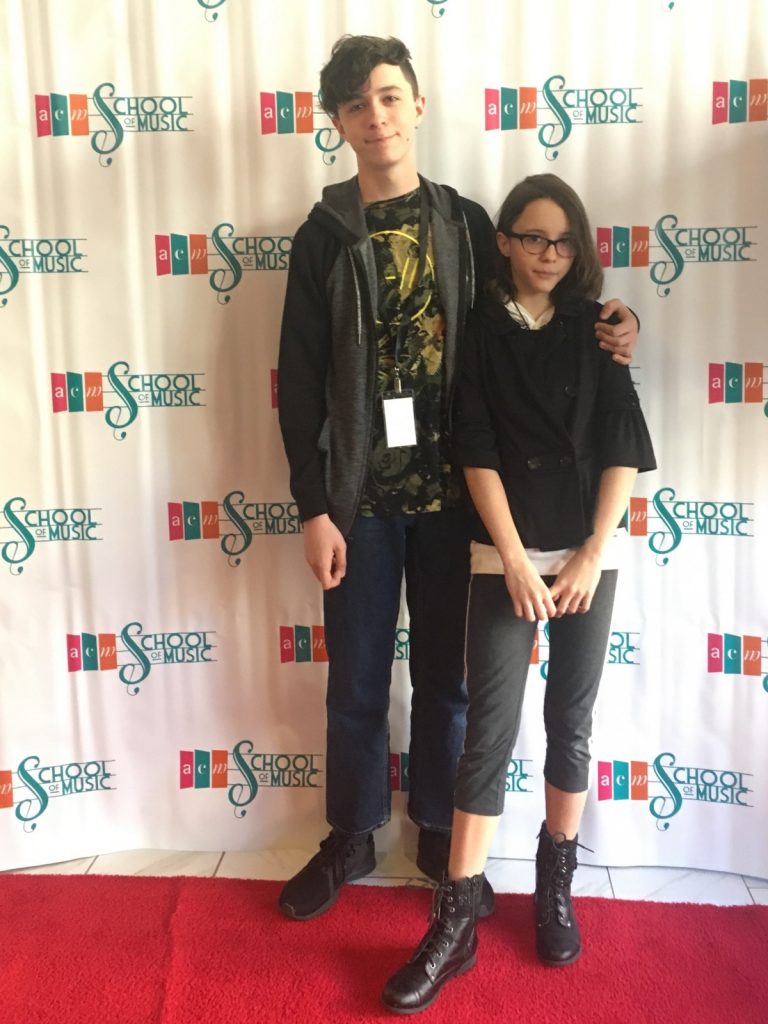 He laughed and read it over with some suggestions—he’s a wonderful editor—and the next morning before work, I handed the lyrics to Liam and asked if he’d be interested in writing the music. After I explained the challenge and the deadline (thank goodness it’s summer vacation), he enthusiastically agreed; and we asked my youngest, Lana, who’s 12, if she’d like to sing.  She also agreed, and away Liam went—and 24 hours later, we handed Lana the lyrics and music for a four-and-a-half minute song, currently titled “In the Dark.”

If we had another week, my oldest daughter, Maya, would have created animation to accompany the song, but the deadline is tonight, so we’ve posted it with the lyrics to YouTube.

One of the things that I appreciate about Amanda and Neil Gaiman, and their extended circle of creative adventurers, is their eagerness to collaborate and encourage collaboration. It was a collaboration that brought them together, and our mutual friend Kyle Cassidy had a part to play in that—and several other collaborations orchestrated on the internet over the years. I watched with great interest Neil and Amanda’s 8in8 experiment with Ben Folds and OK Go’s Damian Kulash back in 2011, when they committed to work together to try and create and record 8 songs in 8 hours. One of the songs that came out of that, “The Problem With Saints,” is a family favorite.

So this Blackout songwriting challenge provided me with the first actual opportunity to collaborate with my kids, and I’m really proud of them for working together (no small feat for this preteen and teen). It’s our first attempt at doing something like this, Lana’s first try at singing in public (she’s shy), with the added challenge of trying to sing an “Amanda Palmer” song, in a lower vocal register than she would usually sing.

Honestly, I’m not sure I would have been able to do that at their age. While Liam has been composing songs for a few years, they have been instrumental only and usually classical or EDM (electronic dance music). I handed them the lyrics, and they did the rest.

Thank you, Amanda, for being the art catalyst. I love it when art makes ripples like this. In today’s day and age, making good art is as important as ever, and I’m happy to be a part of it, and to show my kids that, working together, we can do amazing things.

I look forward to listening to the other entries now that we’ve submitted ours. If you’d like to review the hundred responses, you can find them on Amanda’s Patreon page: https://www.patreon.com/posts/sunday-contest-28370965

I’ve been smiling all evening because of the absolute joy of this. There are some great entries for the contest, a few submitted by friends of mine; and for me and the kids, it was really never about the destination, but all about the journey. We got to make something together. That is a gift.

It will be fun to see what evolves out of this.

Thank you for listening to this proud Mama.