David Hartwell in his office. (Photo by Robert Hoge, 2010)

David G. Hartwell has passed away. David leaves an indelible mark on fantasy and science fiction–so many people who write and edit and read have been shaped by his vision and commitment to the genre.

I met David while planning the Fuller Award to honor Gene Wolfe in 2012, and he was so generous and kind in all his help and enthusiasm. I delighted in subsequent opportunities I had to interact with him, at ICFA and other conventions, as well as on trips to New York where our paths crossed. Everything about the way he engaged with the world, from his clothes to his kindness, made a lasting impression. 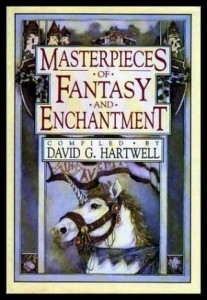 didn’t realize until last summer when I was packing up my books to move that one of my favorite childhood anthologies had been edited by David. Published in 1988, it was one of those literary treasures that always moved with me–from childhood home to college apartment and all the places that followed. I made a mental note to bring it with me to a future ICFA (The International Conference on the Fantastic in the Arts) where I planned to show David and ask him to sign it.

Sitting in my living room and holding that collection in my hands 25+ years later, it felt like an important reminder of the many ways we are connected, of the creative continuum that we become a part of when we release work into the world, and of the ways that childhood aspirations can become reality.
Kyle Cassidy always says, “If you’re doing things right, eventually all your idols will gravitate to your living room.” Kyle calls it the gravity of art, and he’s right. I’m grateful that I had the chance to get to know David Hartwell.

So many people I care about–writers and editors and fans, are hurting from the sudden loss. My thoughts are with David’s family and friends.

Patrick Nielsen Hayden wrote in his online tribute that David “was our field’s most consequential editor since John W. Campbell.” Many people have been sharing photographs and memories.

David Hartwell’s legacy is vast. He will never be forgotten.