What are you afraid of?

In the world of Mother Christmas, creatures called the kobaloi feed off fear. So they seek out places where fear is in abundance: battlefields, prisons, and those spaces where people are persecuted and tortured.

The oldest and most clever of the kobaloi will choose a particularly fearful human to attach to and will remain with the human in a parasitic relationship, encouraging them to cultivate more fear around them.

Because they want to amplify the message of fear, they look for human beings in positions of power. It is in this way, they try to steer humanity down self-destructive and fear-inspired paths.

Muses, as agents of inspiration and change, are taught from a young age to avoid the kobaloi. The following two pages are from a Mousai children’s book, warning them about the appetites of the kobaloi:

The kobaloi get in the way of the work of the Muses, who are trying to inspire human beings toward fulfilling their best destinies—creating a more beautiful, thoughtful, and more just future.

Tonight is Krampusnacht. We’re nearly at the winter solstice, longest night of the year in the Northern Hemisphere. We may have electricity and technology, but our world is still covered in darkness.

The dark can be cozy and also uncomfortable. Like anything mysterious, it exists in a place of paradox, it is possible for both to exist at the same time. A mystery can be scary and exciting.

Just like being brave and afraid. You can be both at the same time.

A friend mentioned recently that Christmastime has always had a haunting atmosphere. I think that’s one of the things Dickens’s A Christmas Carol captures so well, as well as other ancient yuletide stories and characters, from Krampus to the Mari Lwyd to the Tomten. They are among many manifestations of the complex nature of winter, darkness, and all great unknowns.

We see different things when we look into the depths of a great Mystery. So much of it depends on perspective: where exactly are we standing and how have our experiences shaped what we see?

Looked at from that perspective, our fears reflect back to us a snapshot of who we are in a given moment. Which makes  me wonder, tonight on Krampusnacht 2022, what fears are we grappling with?

What do our fears say about who we are, right now?

If you have not heard of the recent Tumblr phenomenon of Goncharov, you have only to google it to read a breakdown by The Guardian, Variety, and NBCnews. 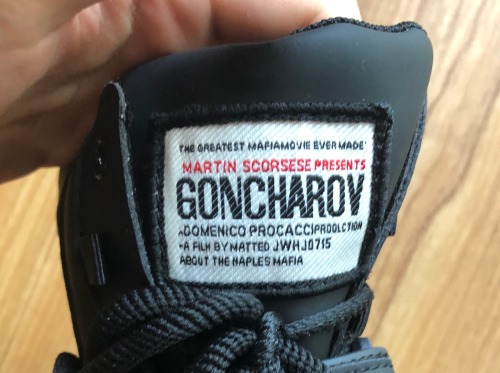 What began a few years ago on Tumblr with a photograph of a pair of boots with a label that read “The greatest mafia movie ever made. Martin Scorsese presents GONCHAROV,” evolved into an online collaborative fan community that is still working to world-build an entire film franchise that never existed.

I learned about it the way I learn about most memes and pop culture, from my teenagers. In the days leading up to Thanksgiving, we had a group chat spring up on Discord that included two family friends who were going to be joining us for the holiday from out of town. One of the topics of conversation turned to Goncharov, the imaginary film around which an active Tumblr fan community had sprung up, as if it had been a real, little-known cult classic from 1973 made by Martin Scorsese.

It became a fun creative exercise—in the middle of the day, one of the kids would send a question about Goncharov: “What do you think about the relationship between Katya and Sofia?” or “What did you make of the clock tower imagery?” or “Goncharov… iphone or android guy?” To which someone else would playfully answer.

This same kind of thing was happening on a massive scale on Tumblr, where artists created movie posters and promotional materials, composers posted songs and soundtracks, people posted deleted scenes and script fragments. There are reviews and academic papers, fictitious Wikipedia and IMDb listings, and A LOT of fan art.

Lynda Carter posted a photo on her Tumblr with Henry Winkler that she captioned, “Me and ‘The Fonz’ at the premiere of Goncharov (1973) at Grauman’s Chinese Theatre.”

Discussions popped up about the characters and who would play them in the reboot. Posts were shared hundreds, then thousands of times. A Goncharov (1973) Lore Google Doc and Discord server were created to help keep the content organized.

Our family’s fan-favorite character was Ice-Pick Joe, so I wrote “Musings on Ice-Pick Joe” in between chopping veggies for stuffing and waiting for the sweet potatoes to roast, complete with some AI-generated art. That was four days ago, and the post has been liked and shared more than I anticipated, and I keep thinking about why that is.

Conversations around Goncharov have continued, and I find myself wondering what it is about this moment in time and this type of activity that continues to capture so many people’s imagination and engagement? Tumblr is a hub for public fandom culture and community in a way that the other social media platforms are not. It’s where you can find discourse and fanfiction/fanart for almost anything.

Still, this is a little different and on a much larger scale. At a time when people are looking for Twitter alternatives, with the stress and joy of holidays approaching, what is drawing so many people in?

We talked about this over Thanksgiving: the way Goncharov allowed people low-stakes permission to create, to play to their particular strengths, to connect with other people, to escape reality for a moment, to build a new community. We talked about the shortcomings and challenges we saw: power dynamics, issues of race, etc.

It’s an evolving experiment, and as such, it has been shaped by the many variables involved and course-corrected each time someone notices a gap or opportunity: What would a musical look like? What if some of the actors had gone on Sesame Street or the Muppet Show? What if Gonzo played Goncharov and Miss Piggy played Katya? What would the remake look like set in 1980s NYC? What recipes might be created for the Goncharov cookbook? (I remember how much fun we had making the Forking Good cookbook.) There really is no end to what people can come up with. I’m waiting to see if Goncharov gets a Tom Gauld comic or a mention on Saturday Night Live.

It seems relevant that role-playing games, both online and tabletop, have recently increased in popularity. Dungeons and Dragons was the cornerstone of Stranger Things, and 50,000 people attended Gen Con (tabletop game convention) in 2022. It’s not my world, although I’ve watched the joy my kids take in it. My energy goes into writing, but I can absolutely appreciate the fun of playing together.

As a writer, I walk around with worlds in my head, but I don’t get to share them until they get published. Something like Goncharov, which was not an intellectual property “owned” by anyone, gives people permission to imagine and play.

I think it speaks to a need we have an human beings to experience connection, joy, wonder, and hope. We’ve always had those needs. People have been gathering around fires or tables, telling stories, for thousands of years.

Today, the hearth may be a computer or a phone, but the desire is not that different. My November began with the publication of Mother Christmas, my graphic novel, the secret origin of the Santa Claus story which is rooted in the ancient Muses, whose gifts inspire humanity. One of the questions my story attempts to answer is: Where does inspiration come from?

If we look at Goncharov we can see that inspiration comes from so many places. So much is possible when people given themselves permission to play, to shrug off the inner critics and outer trolls, and to imagine for a moment a different world that they have a part in creating. That is such a powerful and compelling idea.

Stories remind us that we are not alone, that we share struggles, and that we can overcome obstacles. There are so many challenges in the world right now. Maybe Goncharov is a lens through which people are seeing themselves and each other, reminding us how much fun it is to make-believe and how powerful it can be to have a shared image of the world.

The first step in creation is imagining. Exercising that muscle, allowing ourselves to play and tell stories and make art is a worthwhile one, and I think it’s one that we need to survive.  The Goncharov phenomenon gives me hope, because if we can have this many people put their energy into creating a whole world around Goncharov, just imagine what else is possible?

Thank you to everyone for your support and enthusiasm about Mother Christmas!

A few people have reached out to ask how they can help spread the word about the book. Thank you so much for those offers. I really appreciate them. One of the reasons that my first book The Silence of Trees became an Amazon bestseller when it was first published was because people talked about it.

Here are a few ways you can help to share the Mother Christmas magic:

(Thanks for this helpful list to my talented friend Stephanie Feldman, whose second novel, Saturnalia, was just released last month — and with whom I’ll be doing an online Winter Ghost Story event next month!)

I hope to have information about signings and events this week, so you can come and get your copy of Mother Christmas signed or pick up a copy.

If you have other suggestions about how to increase visibility for Mother Christmas, or if you have a bookstore or comic shop that would like to plan an event, you can contact me here.

Thank you and blessings of the Muses to you. 💜