In graduate school at the School of the Art Institute of Chicago, I took a class called the Shape and Structure of the Book with M. Evelina Galang. It was one of my favorite classes because we broke books apart to see how they worked, looking at the bits: choices of perspective, setting, chapter breaks, syntax.

I love knowing how things are put together, especially stories. Everything is a choice when you’re crafting a story: Where do you start? Who is the protagonist? How many chapters? What do you name the town? How much history do you include? What word best describes the villain? Where do you end? What will be your first sentence? What will be your last? So many choices. Some conscious, some intuitive.

If a writer is successful, readers don’t notice the machinations of the plot, characters, setting. A puppeteer doesn’t want you to think about the strings. A magician doesn’t  want you to focus on the sleight of hand. A writer doesn’t usually want you to notice a clever plot device or stop to admire the way a character’s backstory was carefully developed.

Last year, I had the idea for a story. I wrote it, and I liked it, but it didn’t feel quite right. A few months ago I realized that this was because it wasn’t meant to be a short story, but a comic. So I wrote it and revised it (thanks to some helpful comments and feedback), and I asked artist Madeline C. Matz if she’d be interested in doing the artwork for it, funding it through Kickstarter. She was, and away we went! 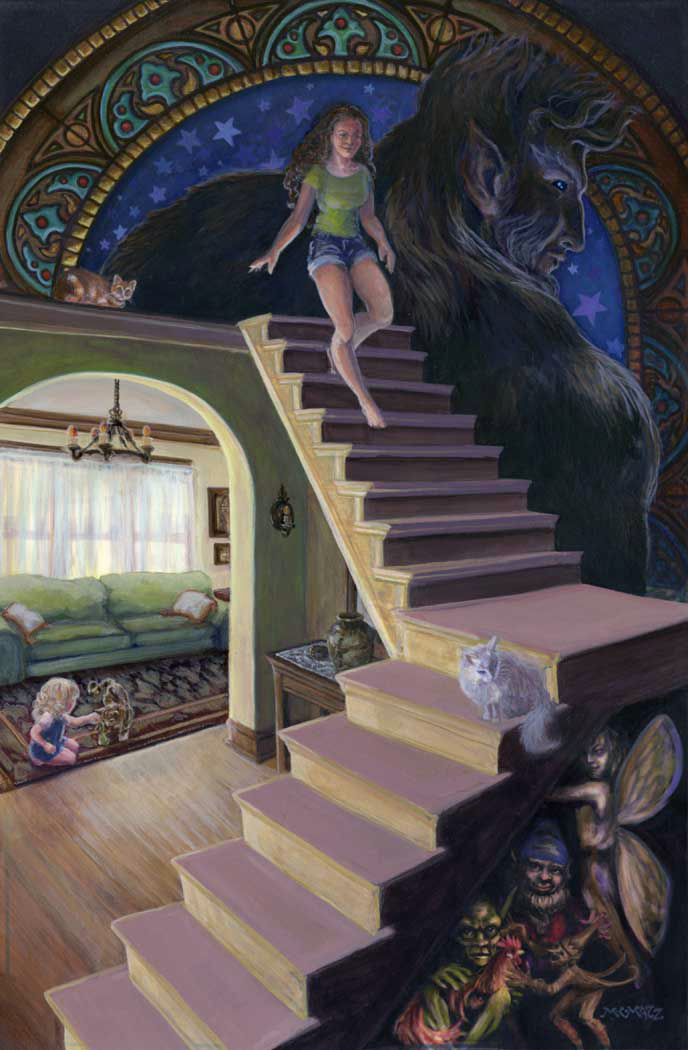 Last week we launched our first Kickstarter comic project: Sticks and Bones: Issue 1 – Home Is Where the Hearth Is.  The comic explores issues of home, roots, identity, and sacrifice on 24 fully-painted pages.

Home Is Where the Hearth Is tells the story of Yaroslav, a displaced house spirit in America looking for a new home. At its heart, this is a fairy tale about love and transformation, and the sacrifices we make to find our place in the world.

You can learn more about the comic and the incentives being offered to backers on our Kickstarter page:

We’re hoping to raise $3,500 to cover the costs of production, printing, shipping, and promotion. As is the Kickstarter policy, if we do not raise the full amount, no one gets changed and we will be unable to complete the project. If we raise beyond that around, we plan to print more copies and then begin Issue 2.

Available on the kickstarter page, here’s my attempt at an introductory video (encouraged by Kickstarter). The beautiful musical score is “The Domovyk’s Lament,” written by Rob Lambert. The photos are used with permission by 8 Eyes Photography. The shaky camera is my feeble attempt at videography. Forgive me, I usually work with words, not cameras.

Thank you for your support!