Last night I had the pleasure of listening to Neil Gaiman read a story he had begun in 2004 and finished last year, “The Return of the Thin White Duke.” Neil was originally asked by artist Yoshitaka Amano to write a story to accompany Amano’s sketches for a fashion spread featuring David Bowie and Iman, but only the first half was published in 2004. Neil completed the piece for his upcoming short story collection TRIGGER WARNING (to be released in February 2015).

The inaugural reading coincided with the closing of the David Bowie exhibit at the Museum of Contemporary Art in Chicago. I had the opportunity to view the “David Bowie Is” exhibit a few weeks earlier when Brooke Bolander was in town, and it was wonderful–provocative and inspiring.

While I have always enjoyed Bowie’s work, I had not previously encountered the full scope of his creative vision. Taken from his personal collection and accompanied by corresponding Bowie songs, the exhibit included storyboards and relics, books and sheet music, videos and photographs, and so many exquisite clothes.

All of them came together to create a portrait of a man who seems to delight in creating new experiences for his audience–reinventing himself, challenging expectations and norms, using his persona and music to affect change.

Neil’s reading closed out a steady stream of Bowie admirers and cultural icons who have graced the MCA stage over the last four months to celebrate Bowie and his influence.

I adore Neil’s writing, and his short fiction in particular. He is a master storyteller. Whether set in primeval oceans, Elizabethan pubs, wolf-infested walls, or alternate dimensions, the worlds Neil creates are vivid and populated with characters who feel authentic. When Neil reads his work aloud, it all comes crashing into life, words like waves washing over an audience who will raptly follow him anywhere.

During the Q&A, Neil talked about the challenges of writing historical characters that remain “true” to the reality of the person, in particular those who are still alive. In “The Return of the Thin White Duke,” Neil has captured something of the enigmatic yet almost archetypical essence of David Bowie. Rich with the “fantastic,” yet grounded with carefully selected real-world details, “Thin White Duke” feels like something that could easily exist in one of the multiverses of Bowie’s mind, snaking its way into his songs and sketches. 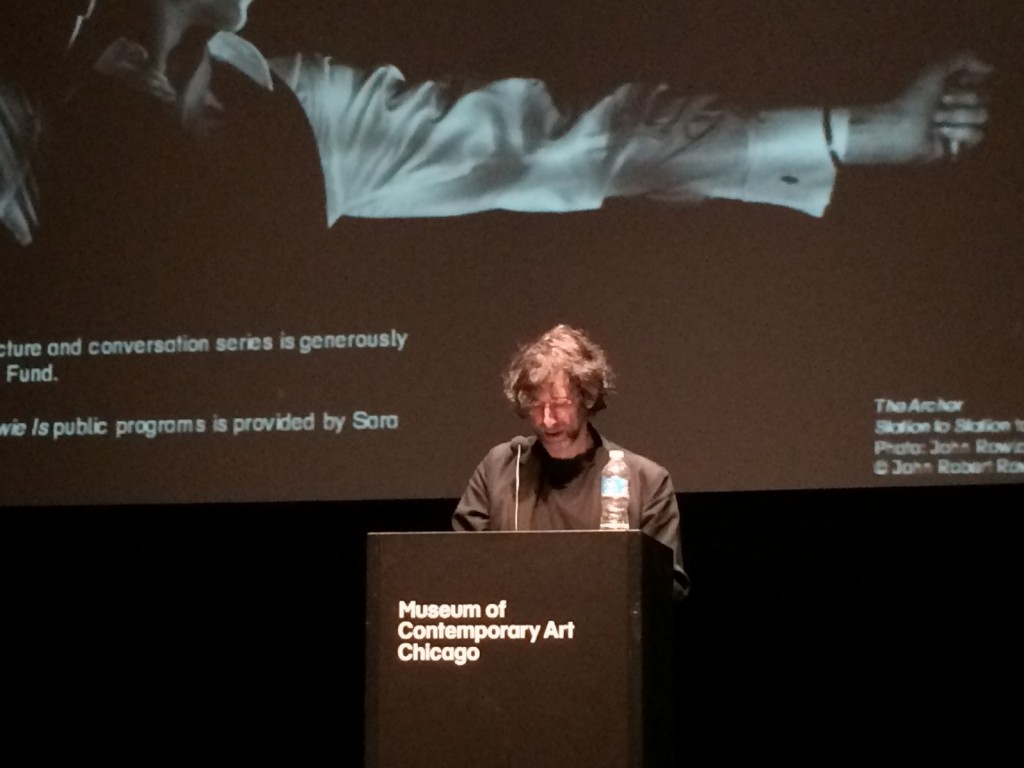 Neil talked about how when he was young, Bowie’s songs presented him with doorways that in turn, led Neil to new information and ideas, things that inspired him. Interesting that while standing in line and waiting in the auditorium, I heard the same thing said of Neil and his work. So many people talking about the influence that Neil’s fiction and tweets and blog entries and comics have had on their work, their art, their lives. Neil, like Bowie, presents us with doors. It’s a creative continuum: ripples from artist to audience, and artist to artist, and so on.

“The Return of the Thin White Duke” is a beautifully crafted Neil Gaiman story inspired by another risk-taking artist who continues to challenge us to “turn and face the strange.”

I won’t spoil the ending for you, but I will say it is a story about transformation and sacrifice, a story about the ways we reinvent ourselves when we try to get back in touch with our heart–and these things at this moment in time resonated with me in a way I did not expect. It was a gift of serendipity, and another kind of door opened.

Rolling Stones, You Can’t Always Get What You Want