Kevin’s Between the Lines Blog continues to impress me. This week there is an evocative interview with the lovely

This from the site:

We should not be able to say of a man, “He is a mathematician,” or “a preacher,” or “eloquent”; but that he is “a gentleman.” —Pascal

I’m tempted to say of Jennifer Summerfield many things, that she’s like ripening wheat on the plains of Wyoming or a swaying palm in Santa Monica, that she’s an expat in Paris or a bright light in the Big Apple or a West Philly resident and a magic lantern of the stage. Then I’m reminded of Pascal, and stop short. I absolutely refuse to call her a “gentlewoman.” That’s just too 13th century. But I will call her a damn fine reader and a wonderfully sincere and insightful respondent. Jennifer reminds us that, because we’re all magic lanterns, projecting personae and occupying roles, we desire solid footing and permanence: “I read because it makes me feel immortal.” 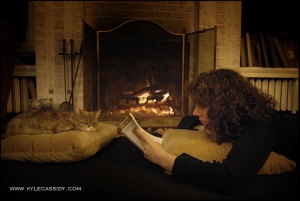 Jennifer Summerfield (AKA Trillian Stars): proof, if proof was ever needed, that people purr, too

What was the last book that you read? How did you like it?

I’ve been reading a great deal for other people recently, having become a member of a book group, and in my off hours trying to stay abreast of my husband’s projects in the science fiction world (which is not my chosen milieu). The last two books I’ve read have fallen into these categories — Coraline read on our way to the Science Fiction convention in Montreal, where Neil Gaiman was the guest of honor. I love the world Gaiman creates in Coraline — he has a knack for writing as a child, seeing the world from the frustrating vantage point of a precocious little girl who longs to be appreciated and challenged. It brought back so many memories of trying to be heard, but being too shy to speak. While I was reading Coraline, I was re-reading Ivan Turgenev’s Fathers and Sons, which I had read in college when I took a Turgenev seminar, but enjoyed so much more this time around, nearly fifteen years later. I’ve always preferred Turgenev as a personality, and as a student of French language and culture, I was fascinated by his life as an expatriate in Paris, friend and confidant of the likes of Pauline Viardot and George Sand. However, as a 21-year old, I found it impossible to sympathize with any of the characters in Fathers and Sons, preferring his On the Eve with its female protagonist filled with revolutionary thoughts and passions and desires. At 35, I found myself reading it from the perspective of the “fathers”; having lived long enough now to know what it is to lose a loved one, I was filled with compassion for Bazarov’s well-meaning, but suffocating parents. The fascinating thing to me about Turgenev’s writing is that he can write in such minute detail that you can almost smell the tobacco in the air, yet you are merely a spectator, never inhabiting any one character’s skin completely. It’s beautifully scientific.

3 thoughts on “One in a Trillian”